Getting into The Good Place

The infamous comedy series might not have won an Emmy this year, but that shouldn't stop one from appreciating this beauty from the Schur universe. The Good Place is more than just a sitcom. It's filled with profound philosophy, wacky scenarios, nearly perfect romances, and social observations that will leave you with an existential crisis. An afterlife theme in the comedy genre is something that is hard to pull off, without igniting debates across regions and, of course, religions. Heaven and Hell, Swarga and Narak, Jannat and Jahannam - these are the popular renditions of The Good Place and the Bad Place. Got your attention? Let's delve into some themes that one might come across in the show. I won't spoil it for you, don't worry. I will, however, talk about the concept of both the places.

The Bad Place is equivalent to Hell. It has demons who torture the poor souls for eternity and twist their flesh in hot furnaces. It sounds gory and fearful, but the makers of the show, thankfully, don't explicitly show the violent torturing. Hell is divided into neighbourhoods, and the Architect is the head demon. He tortures souls according to the quality of their deeds on Earth. The torturing feels like a regular bad day for anyone, but for eternity. Imagine the pain that you feel when you spend hours standing in the queue in an amusement park for a ride, and by the time your chance comes, it's time to wrap up. Yes, tiny inconveniences which add up to your worsening state of mind.

We see our four main leads struggling even in the afterlife. The show moves in a direction where for a long time you wonder - 'are we living in the Bad Place?' Everything seems so familiar. The corruption, the politics, the unethical consumption under capitalism, the toxic environment people funtion in, the constant turmoil in our minds; all of them scream Max Relate. You wonder if this, make believe afterlife simulation these four souls have been put into, is the bad place. Not long before this thought crosses your mind, you are hit with another realisation - the world right now is the bad place we have been warned about since episode 1.

But does that mean we aren't capable of change? Absolutely not. One of the themes that make this show so much more interesting, is the philosophical exchanges between the characters. It challenged moralities that tell people to do things to either get a reward or avoid being punished. It showed how good acts don't necessarily make you a good person, because they might be morally corrupt. It proved that humans are capable of positive change, how no one is beyond the point of redemption. The Bad Place showed the imperfections of today's world, yet also made it easier for us to accept the reality. It revolved around Jean-Paul Sartres supposition that - "Hell is other people. But it doesn't have to be. And that choice begins with who we choose to be. So what do we owe to each other? And what more can we be if we do good things because we choose to and not because of a social contract or sense of debt or even a desire for moral dessert?" But then, what is The Good Place?

The Real Good Place, was the friends we made along the way

The Good Place doesn't exist. Atleast not the way we'd imagine it to be. Only in the last two episodes, do we get to see the actual Good Place, and oh dear lord, it's boring as hell (pardon my pun). Everything is perfect, time is stagnant, you get to live eons in the same place, and interact with the same souls that were there thousands of years ago. The lack of surprise, dynamism, and change makes it even less appealing. To put it simply, everything is fine. You realise how broken and faulty the points system is.

In a nutshell, we are incapable of doing good in the modern era, because the world is so complex. Our actions have ramifications we can't see or know about through supply chains. All decisions are hedonistic and selfish, thus leading to negative points. The points system is generally seen as an analog to strict utilitarianism which the show seeks to critique. Therefore, it brings us to the question - what is the real Good Place?

To quote Chidi, one of the lead characters, "This is what we’ve been looking for since the day we met. Time. That’s what the Good Place really is - it’s not even a place, really. It’s just having enough time with the people you love”. As the show progresses, we realise that having a good, loving environment around you can help you overcome your biggest flaws and push you to do better. The solution to an already flawed system, as the show presented it, is to measure a person's worth based on their ability to self-actualize, rather than to simply do good. The real question that arises often, is what we owe to each other.

The four leads, Eleanor, Tahani, Jason, and Chidi, were all shaped by their parents and their experiences, to an extent that they were literally unable to react in a different way to things that happened to them. It's only after in their afterlife, that all the material constraints on their personage were done away with, and that they chose to learn and grow. Forget the earthlings, even Michael, a demon originally, realised how forked up the Bad Place was. He became a better person because of his will to change and accepted the friendships around him. Janet, the not-a-robot-not-a-girl being, went from being Alexa's superior, to experiencing human emotions like love and pain. To encapsulate, each character in the show goes through a transformation arc, not because the director wanted them to, but to show how humans behave the exact same way and are capable of change (even when they feel like a lost cause). It's a story of not how you start, but how you end that matters. Whether it's through love, friendship, or personal choices, you can end up in a different place to where you started from, if you are willing to open up. All of them do it. Jason learns to calm his impulses and reflects like a monk; Eleanor is a lying, cheating Arizona trashbag who learns to care and put others first; Chidi learns to calm down and make decisions because of his love for Eleanor; and Tahani does good deeds not because she wants attention, but because she wants to be a better person. Even Shaun ends up a better version of himself and keeps trying to be so. Sadly, it's only in the finale where you get to see the outcome, and you wish for the show to go on. But seeing the best versions of all the characters in the show makes your heart swell with joy. This is the real Good Place that everyone had been looking for.

So, can we get into The Good Place?

This brings me to my last point - Can we get into The Good Place? Well, let's begin with Judge Gen's observation, "Earth is a mess y'all". The points system is crap. I mean, no one got into the Good Place for the past 500 years. Not even Mother Teresa! Because of the flaws, we can no longer deem this accurate. 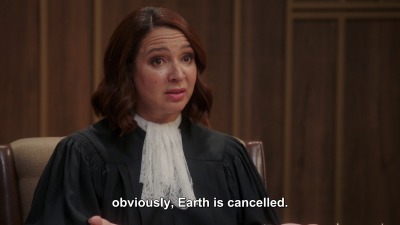 So, no, you can't get into this Good Place. But you can create one yourself on our planet (and if you've read the article till here, you'll know how to do that). Unless they decide to erase the earth by partnering up with Thanos, there's still a chance of getting into the Good Place (that you wish for). Till then, enjoy jeremy bearimy!

Climate Grief – is it real?